As we draw to the end of a fantastic year for them both,  Emma Collins and Menai Baugh represented Wales in the British and Irish International Cross Country Championships in Singleton Park, Swansea on Saturday. Conditions were perfect – glorious sunshine and 9c. The course was 3.6 miles, three laps and hilly with 305ft of ascent but they both really enjoyed the experience of being part of the Welsh Team. Emma was 2nd counter for the VF55 team, 14/19 in her age category in a quality field finishing in 26:54. Menai, part of the Welsh team for the first time, had an excellent run in the open race, holding her position in front of two other Welsh ladies, and finishing in 32:51. 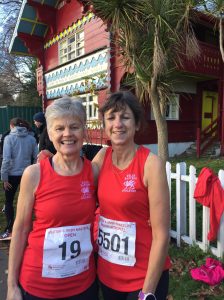 Also on Saturday was the Penmaenmawr Fell Race. It’s one of the longest running fell races on the North Wales calendar and is justifiably popular for a winter race. The race had over 170 entries and the six Denbigh Harrier runners had a beautiful clear, if cold, day to run the 10.5 miles of mixed terrain including the infamous bog between the top of Penmaenmawr quarry and Tal y Fan. The route climbs just under 2000’ feet mainly done in the first 2 miles. David Baugh showed consistency running this race in the same time for three years to within 20 seconds. Victoria Whitehead was pleased with her improvement on last years’ time and by beating a couple of rivals. Tony Benton was running this for the first time and loved the race despite taking a tumble. Sioned Griffiths improved her time on last year by over 4 minutes after a great run of form. David Say put in a strong performance despite only just having got back into his running after his epic Lakes in a day race last month. Jon Whitehead enjoyed the perfect running day with splendid views and some great company. Thanks to Katy Baugh and Ted for their support when most needed.

On Sunday, 15 Harriers took to Conwy to race and enjoy the beautiful Conwy Half Marathon. Starting at Conwy Castle and heading out to Llandudno to run the round the challenging Orme before following the road back to Conwy, the race had a great turnout with just shy of 3000 runners completing the course on this it’s 10th year. First home was Shaun Hughes finishing 8th  and 3rd SM in 1:19:47. Next was Philip Hayes 274th 1:35:44 with Mat Jones 466th in 1:42:02 and 6½ mins quicker than his last run here in 2016. 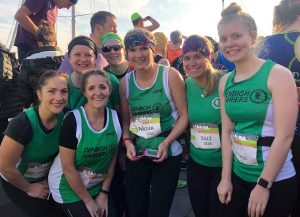