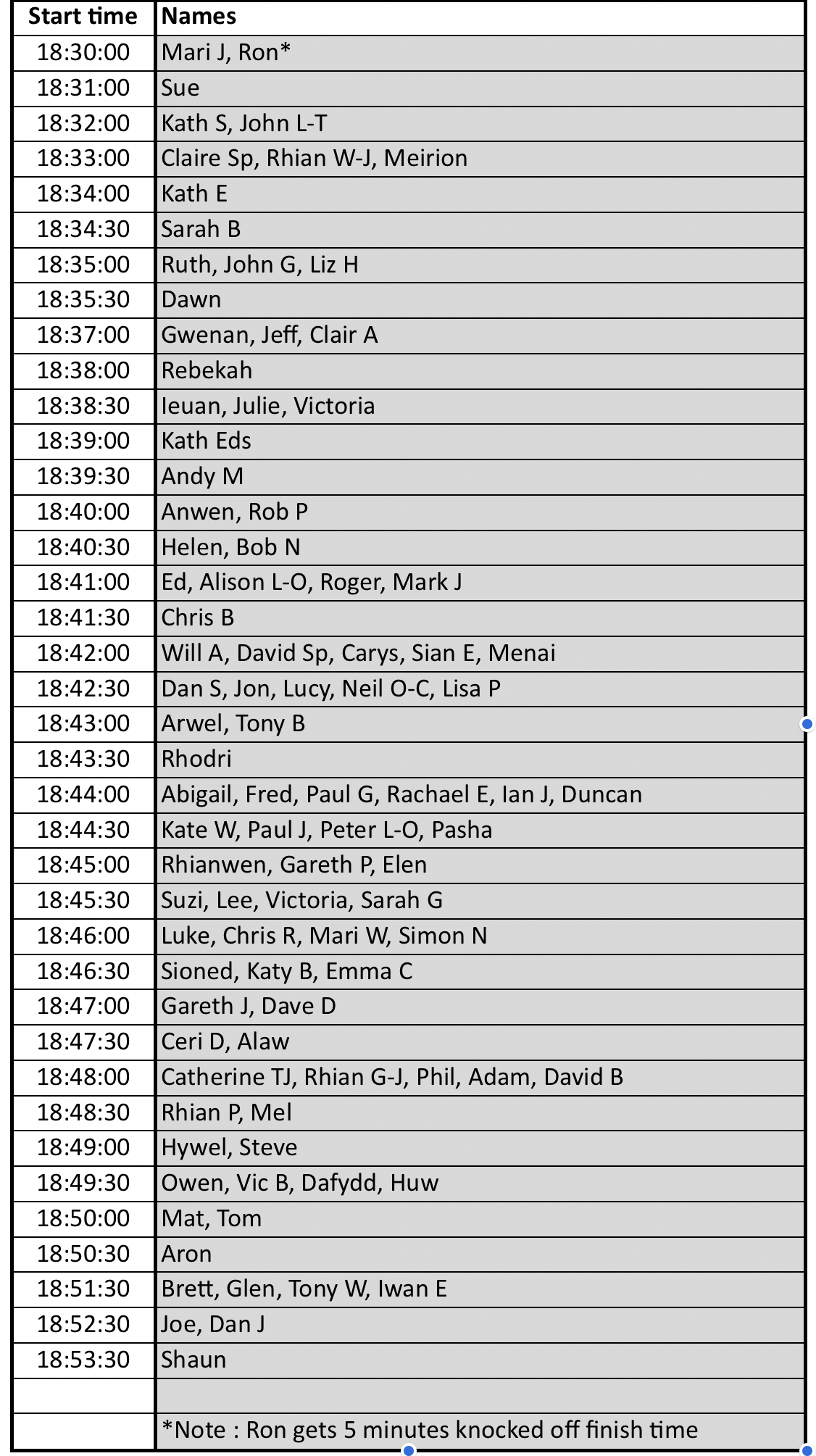 Posted in Cross-country, Summer Handicap Series | Comments Off on May Handicap Start Times

Posted on 15th April 2022 by admindh
For the April race, conditions were pleasantly dry-ish underfoot for the time of year, with only a few bad patches of mud. There was however quite a stiff breeze blowing into faces on the climbs
25 people ran, 22 on the night and 3 virtual racers. Some good improvements in pace (Victoria especially, who took 4 minutes off her March time). Helen Davies has 2 good results (4 points) already to take towards the title race, along with Sarah G on 9 points
The next race will be held on Tuesday 3rd May. Good luck all !
Rob 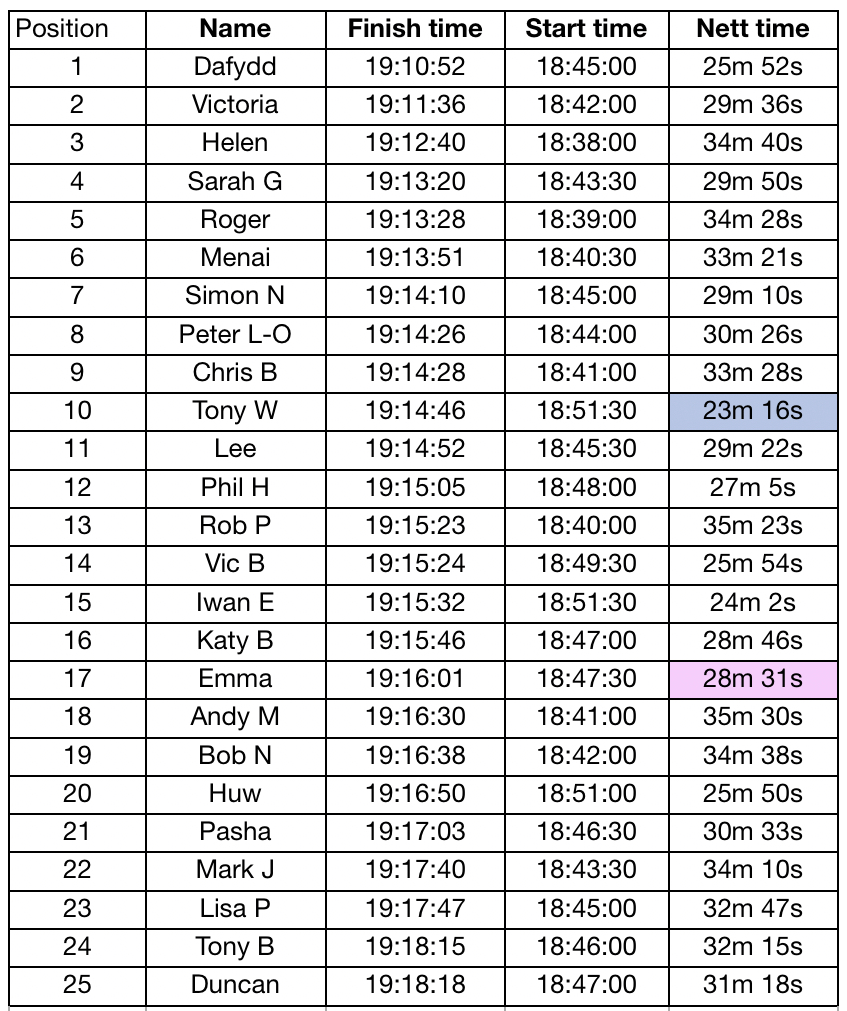 The Noel Morris Summer handicap got underway on 13th March, in quite benign ground conditions (for a change), though there were a couple of areas on the course that did hold mud, and a number of competitors also commented on the headwind in places.
24 people did the first round of competition, with Helen Davies storming home in first place, Sian E just a few seconds behind. Katy Baugh picks up the third place points
Fastest gentleman was Vic Belshaw in 26:17 (virtual run).
Fastest lady was Katy Baugh, in 27:58
For next month onwards, the race will move back to it’s usual nominal start time of 18:30 on the first Tuesday (5th April)
If you’d like to race and your name is not on the list, please ask for it to be added. All are welcome !

This procedure is to ensure continued ‘duty of care’ for members during an accident or incident and to ensure compliance with reporting records being properly maintained.

The four main areas covered are:

All accidents and incidents reported to the club will be recorded and kept on permanent record.

Members are responsible for their own safety when training outside of club training hours.

At events being run by other organisations where an accident occurs, members should contact the event organisers directly and as soon as possible. 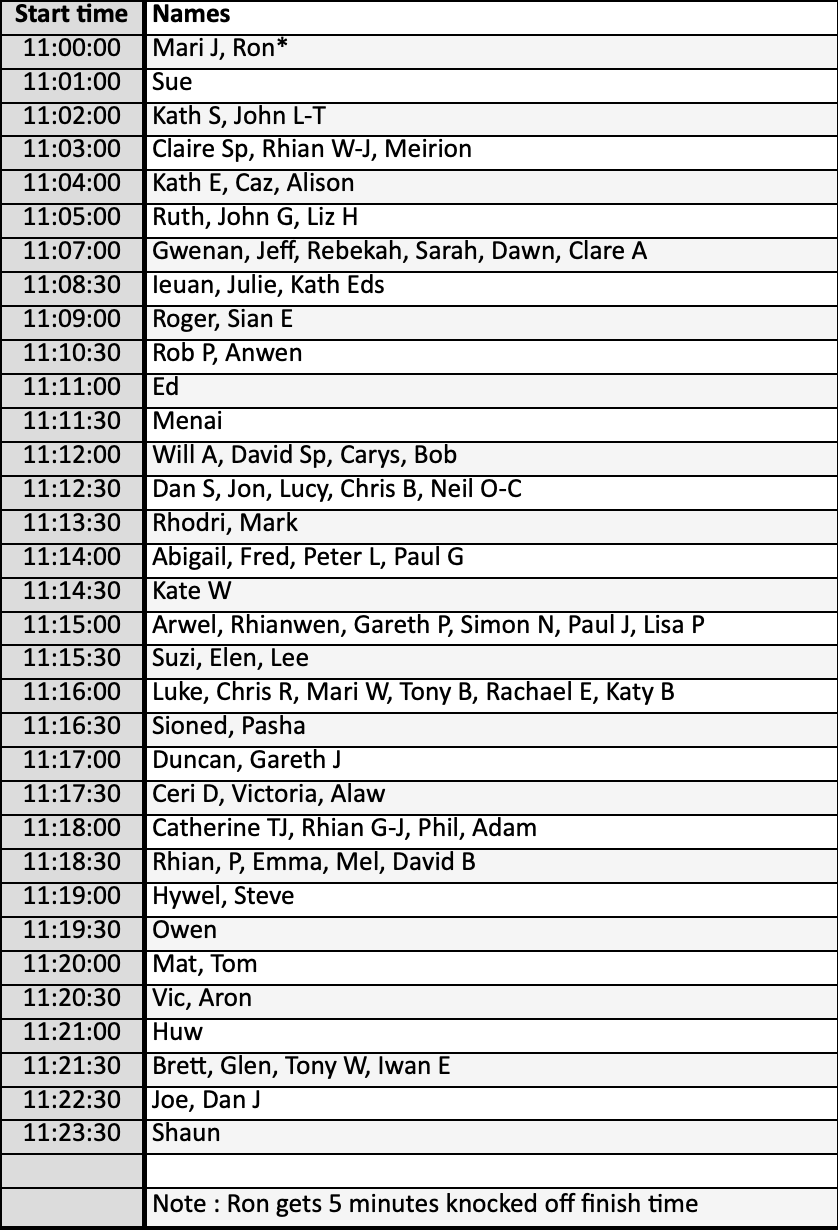 Only 2 Harriers for a local 5k and 10k trail run in Loggerheads on Saturday 26/02/2022. First to set off was Sioned Griffiths in the 10k race which involves 2 very hard loops, with what felt like a hundred steps to climb up – not once but twice! Sioned came home in 35th position out of 84 runners in a great time of 63.12
Shortly after the 5k race started with a smaller field of 28 runners, with David Spencer taking part in this one and coming home in a fantastic 7th position in a time of 33:18.

Sunday 27/02/2022 has been a date in the diary for many of the Denbigh Harriers for some time. The Sheeptracks race is always a great event with a route around the Clwydian Hills that varies each year. Runners are given a map with Check Points to reach, but how they get there is up to them! A fitting name for the race then as often runners will follow sheeptracks, even in to gorse patches if it’s a faster line. 10 Denbigh Harriers started from Cilcain on a beautiful sunny day. The temperature was low to start but racing up Moel Famau soon saw layers being stripped off, and the thin breeze at the top a welcome aide. Vic Belshaw romped home in 1st place overall on the Short Course picking up the M60 trophy in a very competitive field with the top 3 only separated by a couple of minutes over the 13 mile course. The Long Course was around 17 miles and again attracted some of the best talent in Fell running locally and from further afield. Dan Jones was the first Harrier home in 16th place overall, followed closely by Tony Wood in 20th position. Brett Jones and Tom Jones powered on finishing 27th and 34th respectively. Huw Williams made his first racing return since COVID finishing 56th followed by Mel Morris who, as always, thoroughly enjoyed the experience finishing 58th. Chris House on his first run for the Harriers kept pushing on to finish 63rd with Mike Hobday just behind in 64th overall and 2nd M60. Peter Lester-Owen was just behind in 66th place and 3rd M60. It was a fantastic day, and a great atmosphere back at Cilcain where runners were treated to cake and stew. Well done to John Heppenstall and his NEWSAR team and all volunteers for a very successful race.

Twelve hardy junior Denbigh Harriers ran the third fixture of the North Wales Junior Cross Country League at Eirias Park, Colwyn Bay on Saturday 19th February. The weather was the truly awful during the races with a mixture of sleet, rain and strong winds. Underfoot the conditions were atrocious on the surprisingly hilly terrain that made it hard going on courses of between 2.5k and 4k dependant on age. Full credit to all the 100 young athletes from across North Wales that took part in the competition. The Denbigh Harrier Under 15 boys were the first team on the day in a tight race against Colwyn Bay. There were some other great individual results in the different races with some of the Harriers racing against children almost two years older than them. Other clubs in the league have realised that Denbigh Harriers are an up and coming force to be reckoned with. The relatively new Denbigh Harrier Junior section trains twice a week lead by a team of Welsh Athletics qualified coaches.

Denbigh Harrier, Mike Hobday, started a weekend of running with the Conwy Mountain Fell Race on Saturday 12/02/2022. This was a 5 mile route with 1650ft of climb over and around Conwy Mountain; conditions were good on the day and dry underfoot. Mike finished 54th in a time of 66:46.

21 senior members and one junior member of Denbigh Harriers travelled to Llandudno on Sunday 13/02/2022 to run The Nick Beer 30th Anniversary 10 km race. The race starts on the prom, climbs up and around the Orme on the old toll road, drops swiftly down on the other side of the Orme to Church Walks to finish back on the prom. The weather was better than was forecast although there was a strong headwind impeding the customary dash down the Orme. The Harriers returned home with a haul of medals and trophies. The ladies’ team consisting of the three first Harrier ladies home – Melina Morris, Alaw Medi Evans and Emma Collins were the First Ladies’ Team out of 11 local running clubs. Melina Morris was also first female over 45, Emma Collins first female over 55. Fred Jones was third male over 65 and Menai Baugh third female over 60. The one and only Junior Harrier Lea Davies was fourth overall in her 1 km race and third girl. Below are the full results – positions and times :

After two cancellations due to storms and COVID 19 the third fixture of the North Wales Cross Country league took place in Oswestry on Saturday. The league which includes all the North Wales clubs also has participation from big English border clubs from Shoprshire and Cheshire too. This venue traditionally offers everything an old fashioned cross country course should and it didn’t disappoint. In addition to the expected hills, uneven terrain and mud the unrelenting rain and wind made it more of a challenge than previous years. In the women’s race over 3 miles Denbigh Harriers had 6 participants with the first four finishers counting towards the final results. Eleanor Ashcroft in her first race in Denbigh colours provided a strong performance in the conditions to finish in an impressive 13th. The ever improving Katy Baugh was close behind in 16th followed by Mel Morris in 20th. The final counter was Emma Collins who also finished as 1st female 55. The team was well backed up by Elen Baugh in 42nd and Menai Baugh in 70th finishing before many of the opposition team’s counters and therefore improving their team’s performance on the day. This resulted in the women finishing in 2nd place in division 1 for the fixture and overall in a strong 3rd place. The over 65 men run the same course as the women and Fred Jones finished in an excellent 10th with Jeff Jones in in 18th.

The mens’s team ran a course of over 5 miles which had been cut up quite badly by the time they ran the race resulting in some falls in the slippy and boggy conditions. Shaun Hughes showed that his modified training has paid off with a tremendous 12th position which interestingly made him the 4th Welshman in the field. Next home was Tony Wood in 20th relishing the hills and mud with Dan Jones in 21st hot on his heels. The improving Aron Evans had a strong run finishing in 53rd folllowed by Joe Welsh, returning to fitness in 63rd. The last counter was Owen Conry in 70th backed up by David Baugh in 87th and Dave Davies who celebrated his return to the club by deciding to dive head first into one of the boggy patches. This good result meant that the men finished in 6th moving them out of the relegation zone in division 1.