Posted on 3rd February 2020 by admindh

Saturday was the final fixture of the North Wales Cross Country League which always can be an anxious day because this is when titles are won and lost as well as the peril of relegation and the joy promotion in the air. Denbigh Harriers turned out one of its strongest teams of the season to make sure there were no unexpected surprises. A total of 22 Denbigh Harriers went to Oswestry to compete against 27 other clubs for the prizes on offer. Despite the fine weather the course presented the usual set of obstacles of hills and mud with the added bonus of streams to cross. The women ran a 5k course with Rhian Pierce running one of her best races of the season to clinch the bronze category F35 prize. Emma Collins was in a close battle for her age category but in the end produced an emphatic gold winning race in her F55 category. Alaw Medi was one place behind her in her best race of the season with Mel Morris a further place back missing an F45 bronze medal by one place. There was a strong runs from Katy Baugh, Mari Williams and Carys Davies to push competitor teams back.  Menai Baugh ended the season with an excellent run to win the F60 category gold. This superb team performance meant that Denbigh Harriers ended up fourth in Division 1, just missing missing out on third. Interestingly they were also the second Welsh team in the league. The team also won the masters silver medal.

In the M65+ 5k race Fred Jones was on form finishing in 4th and winning the Bronze medal for the age group With his teammates Chris Baldwin, Bob Neale and Jeff Jones they were rewarded for their consistent performance over the season with a silver team medal.

The men ran an 8.5k course which by this time had become even muddier and churned up making it difficult to maintain running  rhythm. Despite this there was an excellent run from Shaun Jones for his best performance of the season to finish 12th in this very high class field. He was well supported by improved performances from Joe Welch and Tony Wood with Huw Williams having the his race of the season finishing 30 seconds ahead of Glen Price who was recovering from illness. On the day Mat Jones got the better of David Baugh and Duncan Jones using his skill on the hills finished ahead of Tony Benton. Gareth Powell had his first taste of Cross Country with Denbigh Harriers and hopefully will become a regular next season.  These results ensured that Denbigh comfortably secured promotion to Division 1 and received the runners up silver medals for Division 2. 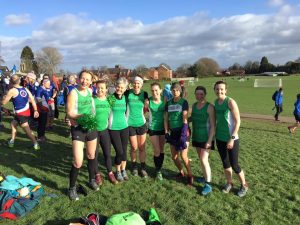 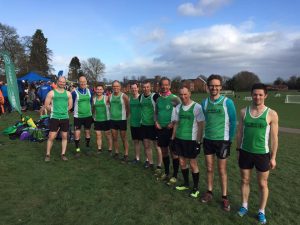 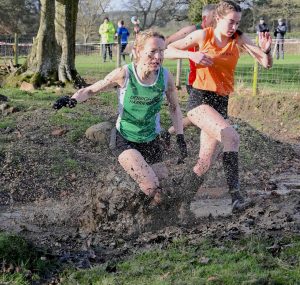