Peter Lester-owen and Luke Hughs headed to Delamere forest for a nice run in the woods. Peter ran the Hell of a Marathon in 6:10:42 finishing 19th! Luke did the Hell Runner (half marathon) in 2:59:56 finishing in 225th out of just under 1000 runners. The course consisted of natural obstacles expected on forrest paths with numerous mud puddles ranging from ankle deep to head hight, fallen trees, river crossings, mud banks to scramble up and slide down and two lakes with hidden roots to cross. Two Harriers made the journey up the road to the Loggerheads Country Park for the Loggerheads 10 mile trail race on Saturday. A small field of 66 tackled the route; a tough, undulating trail race. The terrain is very varied, with some sections of road, technical rocky sections, steep woodland paths and riverside tracks all left slippery and muddy after days of rain. A few interesting long cuts and short cuts, after the directional arrows were tampered with, but still a friendly, fun start to the weekend. Mel Morris came in 3rd lady (2nd V40) 17th overall in 1.31.55. Carys Davies ran a great race to come in 11th lady, 35th overall 1.39.30.One Denbigh Harrier travelled down to mid- Wales on Sunday to compete in the last race in the Welsh Fell Running Championship Series. The series started in February with the sunny, warm Clwydian Sheetracks race and conditions between the first and the last races could not have been more different! The threatening rain held off for Sunday’s Breidden Hills race but the three hills climbed were shrouded in cloud, the fields, the ascents and descents were muddy and slippery and the rock scramble off the second hill was wet and treacherous. But it was the same for everyone, and the same conditions as last year and Menai Baugh enjoyed the challenge of the varied terrain and 2300 feet of climb over the 7 mile course, finishing over three minutes faster than last year in a time of 1 hour 31 mins 37 secs. She won the series and secured the title of Welsh Fell Running Champion for females over 60. She also holds this year’s North Wales Fell Running title for F60. This is the second year in a row that Menai has achieved this championship double. Three Harriers took part in the popular Wiggle Manchester Half Marathon recording some great times. Phil Hayes finished in 1hr 34 minutes followed by Huw Williams in 1hr 42 minutes and Mari Williams with a personal best in 1hr 47 minutes. ParkrunsChester Parkrun20th David BAUGH 00:21:3535th  2nd Woman Katy BAUGH 00:22:29 Personal Best50th Elen BAUGH 00:23:23 Personal BestConwy Parkrun296th John Llewelyn THOMAS 00:46:10297th Sally SMITH 00:46:11 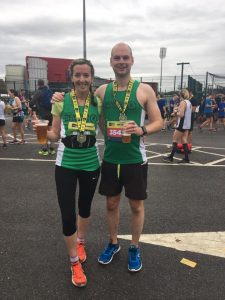 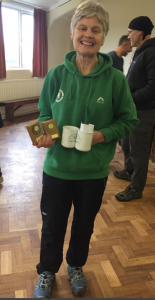 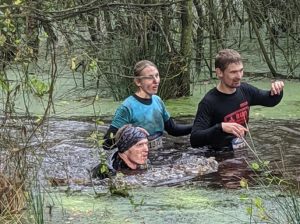