Four Denbigh Harriers completed the 20 miler in Wrexham on Sunday. This race traditionally is a good preparation race for the London Marathon in 6 weeks. The weather was bright and breezy and chilly! The route was a bit hillier than expected with over 1400ft of climb over the 20 miles. The fun started at 8.5miles on a back road where there was a puddle about 6 inches deep to soak the runners’  feet. This puddle eventually turned into waist deep water that the runners had to wade through for 250 metres. Given the temperature it took the runners a few miles to warm up again.  Joseph Welch finished in 16th place and was happy with his time of 2:12:45. Huw Williams ran most of the way with Hywel Roberts to finish in 2:39:06 and 81st place. Hywel finished in 2:43:35 and 93rd place. Lisa Dafydd also braved the challenges in Wrexham to finish in 262nd place in 3:55:39 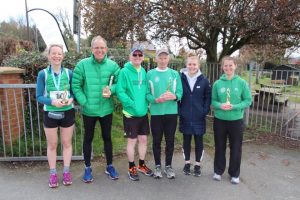 Three Denbigh Harriers were at the Shrewsbury 10k on Sunday where they faced cold but sunny conditions which was for running on this undulating course with a slight diversion due to the flooded River Severn on an otherwise flat section. Just over 2000 runners and 3 good performances from the Harriers. Duncan Jones in 251st overall in 45.51. Ian Jones enjoyed his run in 48.58 with a a personal best and Jess Jones running well in 67.37.

The Parkruns were poorly attended but two harriers braved the awful conditions.