Saturday saw the penultimate fixture of the North Wales Cross Country League held in Shrewsbury. Although Shrewsbury is not in Wales Shropshire and Cheshire clubs compete in this league too. This was a new course and proved to be much hillier than expected. In the women’s race of 5.5 kilometres there was a large turnout from Denbigh Harries and other clubs, especially from local Shropshire clubs. First home for the women in a field of 137 runners was Rhian Pierce in 20th overall in 20m29s who found the course hard work. She was followed by Emma Collins in 26th place in 25m05s and first F55. After a good race between the two Emma was closely followed by Mel Morris at 28th in 25m19s. Staying ahead of her sister the next Denbigh Harrier home was Katy Baugh at 39th in 26m21s with Elen Baugh at 45th in 27m00s.  The next Harrier home was Alaw Medi in 52nd (27m48s) followed by Mari Williams in 55th (28m12s) and Carys Davies in 63rd (28m37s). Menai Baugh kept her North Wales age group title bid on course with a good run finishing in 83rd (30m50s) and as 2nd F60. This performance put the women 3rd on the day and 4th in Division 1.

The Men’s team was a little depleted on the day with a couple of usual high placing runners absent or carrying injuries. Nevertheless, there was a strong performance from the team meaning that if everyone turns up for the final fixture in February the men will be making a return to Division 1. The team was led home on the 8.3 kilometre four lap course by Joe Welch in 60th (34m42s) who was not fully fit for the race. With a superb final lap Glen Price was 70th in 35m44s ahead of the closely packed Owen Conry in 81st (36m36s), Huw Euron Williams 88th (36m54s) and David Baugh 89th (37m02s). Mat Jones who was also carrying an injury was 112th in 39m06s with Duncan Jones finishing in 129th (40m50s) beating Tony Benton 133rd in 41m16s. 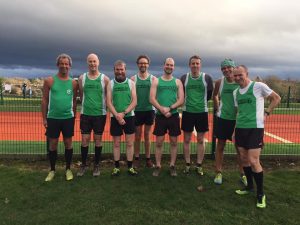 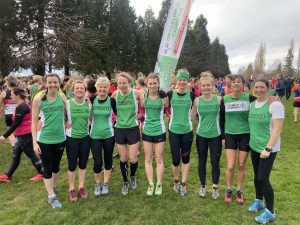 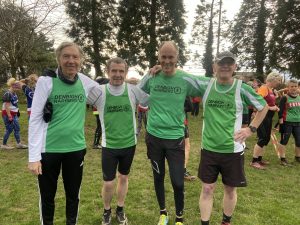