Posted on 28th January 2019 by admindh
On Friday night Denbigh Harriers’ Tony Benton was a first timer to the Dash in the Dark series held at night in Llandegla forest.  He soon realised that his head torch was woefully inadequate for the job. Luckily for him the other 90 runners in the field had “proper” torches so he could see, by their lights, most of the looming tree roots and low hanging branches several steps before crashing into them. This is a lovely trail race that weaves through the forest using some of the lesser used tracks and trails. That the race is in darkness adds a novelty to the sense of excitement and he will definitely be doing this race again, albeit with a better head torch next time. Tony finished 29th in 34m 35s.Vic Belshaw represented Denbigh Harriers in 16th Tarren Hendre Mountain Race 2019. It was stormy weather and waterlogged terrain that set the scene at the start of the race. The poor visibility also caught a few people out with them missing a crucial turning point on high ground. There was quite a battle for the men’s over 50 category with Mercia, Buckley and Aberystwyth. The lead switched a few times on the steep 2,000’ climb to the summit. Vic went over the top first only for one of the Mercia men to overtake him on the descent back into the forest. Once on the fast running terrain he made up ground and re-took the lead a quarter of a mile before the finish to win the category by 18s and placed 20th overall.  It was fantastic race with great camaraderie at the finish and at presentations. The race was made extra special  for Vic as as it was his son’s first mountain race and courses don’t come much tougher.Emma Collins was the only Denbigh Harrier to run in the 4th border league race held at Tattenhall Cheshire. Conditions were cold and very blustery over a 6 mile undulating course with 450 ft climb. Emma was in her category and in the overall standings. Her time was 44:23 and good preparation  for the Nick Beer 10K next month.
At the annual Denbigh Harriers Dinner the Alison Baugh Memorial Trophy for the club member of the year was shared by Mari Jones and Dawn Marshall. 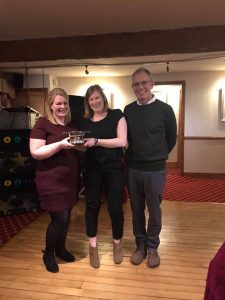