In a week jam packed with racing in mostly gorgeous weather, we start the week at the Joe Brown Midweek Series, this week in Aber Falls. In fell races, no matter the conditions at the start the weather can be unpredictable and this was illustrated at Aber Falls with 5 runners getting lost in cloud and ending up in Llanfairfechan. Luckily all were ultimately accounted for and fine. 4 Harriers raced Aber Falls all picking different routes, none getting lost. David Baugh led the Harriers home in 19th 39:43. David was followed by daughter Katy Baugh still getting London out of her legs, 41st 48:07 with wife Menai Baugh not far behind in 44th & 1st VF60 50:39. Anwen Brown racing superbly on the hills this season finished in 48th 51:38.

On Wednesday, Vic Belshaw headed over to one of his favourite classic fell races – Latrigg Fell Race.  A beautiful evening to be on the northern Fells saw Vic, starting at the front with nostrils flaring and a stampede, this race is known for being fast and furious and this year was no different – no let up, what a competitive field. The route was about 950’ of ascent and 3 miles of fast track and open fell, with Vic 31st and 2nd VM50 in 23:56,  just five seconds ahead of third place!

Friday night saw Steve Gadd race his first 5k ever at the flat, fast and furious Christleton 5k. This prestigious race welcomed 425 runners and spurred Steve to a PB and an incredible 18:50 to finish in 190th.

Saturday dawned with a beautiful sunny morning sending nine Harriers to Ras y Gader – a 10.9 mile, tough, hot, mountain race up mighty Cadair Idris. This race has everything – over 3000 feet of ascent, steep, rocky, technical descents, bogs, a woodland with trip -risk tree roots and a fast road to the finish. The course follows an out-and-back course, following, more, or less, the same route up to the summit and down. Vic Belshaw, despite having run in The Lakes, three days previously, was first Harrier off the summit in 1:55:49. He was followed by Jonathan Fleming 2:10:06 who was closely followed by a smiling Ceri Belshaw 2:11:13, enjoying the splendid views and the sunshine. Emma Collins, running fast off the summit, tripped later, on the treacherous, rocky track and sustained an injury to her knee. It didn’t stop her, however, from finishing the race 3rd VF50 in 2:14:46. Victoria Whitehead 2:17:28, having been on fine racing form recently, struggled in the heat but finished close behind Emma. Sioned Griffiths had a terrific run considering that she has only recently returned from injury and finished very close to her time last year in 2:28:52. Katy Baugh, still recovering from the London Marathon had fun struggling to keep her mother, Menai Baugh, but managed valiantly to reach the finishing line 18 seconds ahead of her in 2:38:48. Menai finished 1st VF60 in 2:39:06. Anwen Brown 2:48:35, triumphantly brought home all the Harriers  and was delighted to have completed her first Cader race. 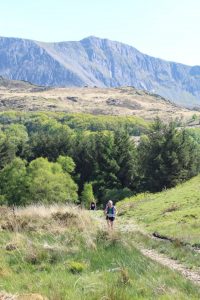 Sunday saw 3 tough races, particularly in this hot and sunny weather we’re having. Another triumph for the long distance Harriers this weekend despite the heat. In the very tough Snowdonia Half Marathon 630 runners took to the route taking in both Llyn Geirionydd and Llyn Crafant before descending back to Llanrwst. Bob Neale, who is just getting better and better with age, finished 1st VM65 in 2:09:08 with Ian Jones keeping him company, finishing in 2:13:11.

Over in hot, hot Liverpool, Abi Corfe continues her fantastic comeback from injury running in the Liverpool Rock ‘n’ Roll half marathon. It was Abi’s first time over this distance since coming back through her long recovery and she was thrilled to cross the finish line, finishing in 2:29:42.

The Sunday round up finished at the Great Manchester Run 10k, the third largest road race in the UK with competitors racing in waves to manage the number of runners on this tight course. 5 Members of the Denbigh Harriers braved the heat to complete this year. After a minute silence and a touching rendition of “Don’t look back in Anger”  and having had a warning from the race officials at the start to take things easy due to the sweltering heat, we knew that it may not be a day for PB’s. Philip Hayes was the first to set off and finish in 45:01. It was Hannah McDonnell 59:44 and David Spencer’s 1:01:54 turn next which saw them go off in the White Wave. Last but not least Sali Powell 57:49 and Hywel Roberts 51:06  went off in the Green Wave.

We finish as always with Parkrun. Elen Baugh ran in Woodhouse (Leeds), finishing 34th lady in a time of 26:03.Further afield in Warsaw, David Baugh finished in 21st overall, in a time of 21:16. Finally, and a lot closer to home at Conwy, Sarah Bayliss was 100th over the line and just behind here recent PB despite the heat (and 17th lady), in 25:40