Oswestry Results and Round-up of 2017/18 Season

Those of you who have seen the facebook pictures will realise that we had more than one amazing result this year. Possibly a factor in our success was the gruelling nature of the courses, requiring lots of  grit and determination. In this whole winter season of cross country races we have seen quite the most consistently harsh weather for many years. It started mildly enough with the flat, four lap, dry, not-to-say-boring, course at Wrexham, but the much tougher Llandudno fixture landed us in the middle of Storm Brian with 50 mph winds and moderate mud. Bangor was also cold, wet and muddier, but nothing unusual in that, while the river crossings and icy standing water at  Baschurch made it a real endurance experience. In my memory Baschurch is up with the mud of the British Universities at Guildford in ’73, or the English National at Luton in ’88. But I was more resilient then.

And so to Oswestry. Not to delay the good news, our Senior Men achieved promotion to the 1st Division for the first time ever by beating Wrexham on the day by more than the required 9 points. Great consistent team effort in closing the huge gap which Wrexham had established after their brilliant performance in their own race in October. Equally good (appropriately so in this gender-neutral age) was the collective performance of our Women’s team in hanging on to their 1st Division place. Again, this was a season-long endeavour after a relatively low turn-out in October which put us last in the Division, and candidates for ‘the drop’. Very good to see all four counters at Oswestry, the youngest being 35 years younger than the oldest, packing in together.

North Wales League Individual Gold Medallists: W55 – Emma Collins; M65 – Martin Cortvriend. It should be noted that Emma was first in her category for all five races.

Individual Bronze Medallists: W60 – Vicky Cortvriend; M55 – David Baugh; M60 – Chris Baldwin. It should be noted that Chris was in danger of not qualifying by not finishing this final race due to exhaustion, and is grateful for the team support in getting him moving again – especially from Tony Wood. 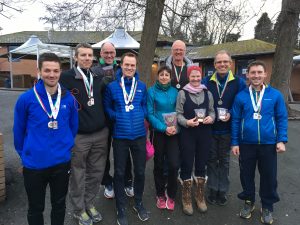 Women (final positions will be about 5 places better than these after subtracting the male youths):

It is often said that those outside the counters contribute to the team if they can push the other team(s) scorers back by being in front of them. The point of wearing team colours is that it is possible to see ‘who is where’ and target them appropriately. I gather that Glen and Martin did exactly this by being in front of the Wrexham 4th counter. For the women, on this occasion  Shrewsbury vests were not so obvious as ours but Sioned and Menai showed the merit of a sensible start by catching up with one of their counters – I thought it was the third one – which meant that even with two of them well in front of Victoria, they weren’t going to repeat their big victory they had scored over us at Baschurch. Katherine did not appreciate the difficult surface, but this is only her second cross country and she will get the hang of it next year, I’m sure. On the other hand, Dawn and Vicky looked much more at home and they weren’t just using smiles for performance-enhancement!

P.S.  The official results show that Shrewsbury, in their own backyard, didn’t even finish a full women’s team. In which case they didn’t really deserve to stay up in Division One.

This entry was posted in Cross-country. Bookmark the permalink.
Social media & sharing icons powered by UltimatelySocial