Two Denbigh Harriers ran the Loggerheads trail races on Saturday. David Spencer ran the tough 2 lap 10k race in a time of 1:13:21, finishing in 96th.
Sarah Bayliss opted for the 5k and took 33:12. She was 12th overall, 4th lady and first lady V50.

UK Inter Counties Cross Country took place on Saturday with regional teams representing all parts of the UK. This was a top class field and Denbigh Harrier Shaun Hughes representing North Wales was the teams’s 3rd counter. The standard was unbelievably high with runners the top runners in the UK competing for honours. 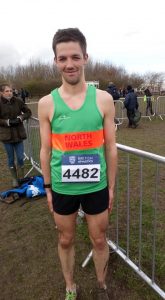 Five Denbigh Harriers travelled to Dolgarrog to run the unusual Pipe Dream 4 mile fell race. The race starts in the village but ascends 1000 feet in the first mile – up hundreds of concrete steps alongside and in-between two enormous pipes carrying water from the reservoir above. It is not the prettiest of fell races ….. However, the descent is pleasant, fast and varied over a small tussocky hill, a rough, stony track, a slippery, muddy woodland, down a steep concrete track with a fast sprint along the road in the village to the finish. Tony Wood was first Harrier home in a commendable 43 minutes, followed by Emma Collins finishing in 47 minutes, Emma yet again proving she is un-beatable on the fells, as well as the roads, in her age category – not only did she take the F50 first prize but she broke the category record too. Katy Baugh was not far behind, running strongly and finishing in 50 minutes. Jon Whitehead also had a strong run finishing in 56 minutes, followed by Menai Baugh sprinting to the finish in 57 minutes and winning the F60 category. 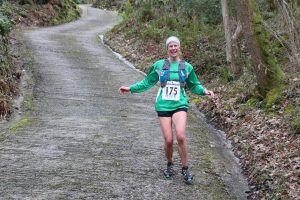 Only two local Parkruns were attended this week with notable runs from an in form Vic Belshaw 3rd overall at Bodelwyddan and Elen Baugh finishing as 1st Female for the second week in a row.

The Harriers went to run the Tatton Hall 10k in appalling conditions including hail and snow. Rhian Jones finished in 378th position in 1.01.41 and Sioned Roberts running her first 10k finished 381st in a time of 1.01.49. 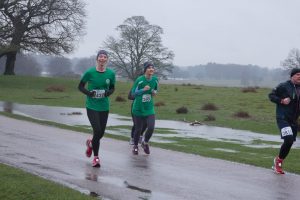